The episode opens with a long recap because this is already a complex story!

Seven (Jeri Ryan) and Raffi (Michelle Hurd) arrive at the clinic far too late and an assistant tells them they had better find Rios (Santiago Cabrera) fast.

Picard (Patrick Stewart) and Agnes (Alison Pill) can’t reach anyone from La Sirena but to make up for it they have a cool cloaking device! They leave the ship safely hidden and explore the decaying château. Picard shares some family history, including the little tidbit that the Picards fled the Nazis to England. He has a bit of a flashback and we see his mother (Madeline Wise), sharing the Edith Piaf song “Non, Je Ne Regrette Rien” from the Stargazer’s auto-destruct scene with a young Jean-Luc (Dylan Von Halle).

Picard and Agnes have lit a fire, and he tells her they need to find out what else she stole from the Borg Queen’s mind as she putters around the room, touching this and that. “Dixon Hill” notices, however, that everything she touched had the number 15. They deduce that the “when” they have been looking for is April 15, three days from the present date.

Raffi and Seven ride in a bus with a “The Europa Report” ad on the side. (“The Europa Report” keeps showing up in the background, wonder if it’s going to play a part in the story?) Inside the bus, a familiar scene: a punk blasts music on his boom box. It’s Kirk Randolph Thatcher, the original “Punk on the Bus” from The One with the Whales! This time however, a few stern words from Seven and he turns it down and apologizes. Raffi is distraught about Elnor and Seven comforts her.

Jean-Luc tells Agnes that he’s going to the coordinates for the Watcher, and asks her to work on boosting the communications and getting them home. He then beams to the coordinates, and Agnes is left behind with the Borg Queen, who is clearly a master manipulator and wants Agnes on her side.

Picard beams into…Forward Ave! The bar is packed up, though. A younger Guinan (Ito Aghayere) and her pittie Luna are getting out while the getting’s good. She doesn’t know Picard (what is even happening here? Are they completely ignoring Time’s Arrow?) and when he mentions that she is an El-Aurian she pulls a shotgun from the bar. 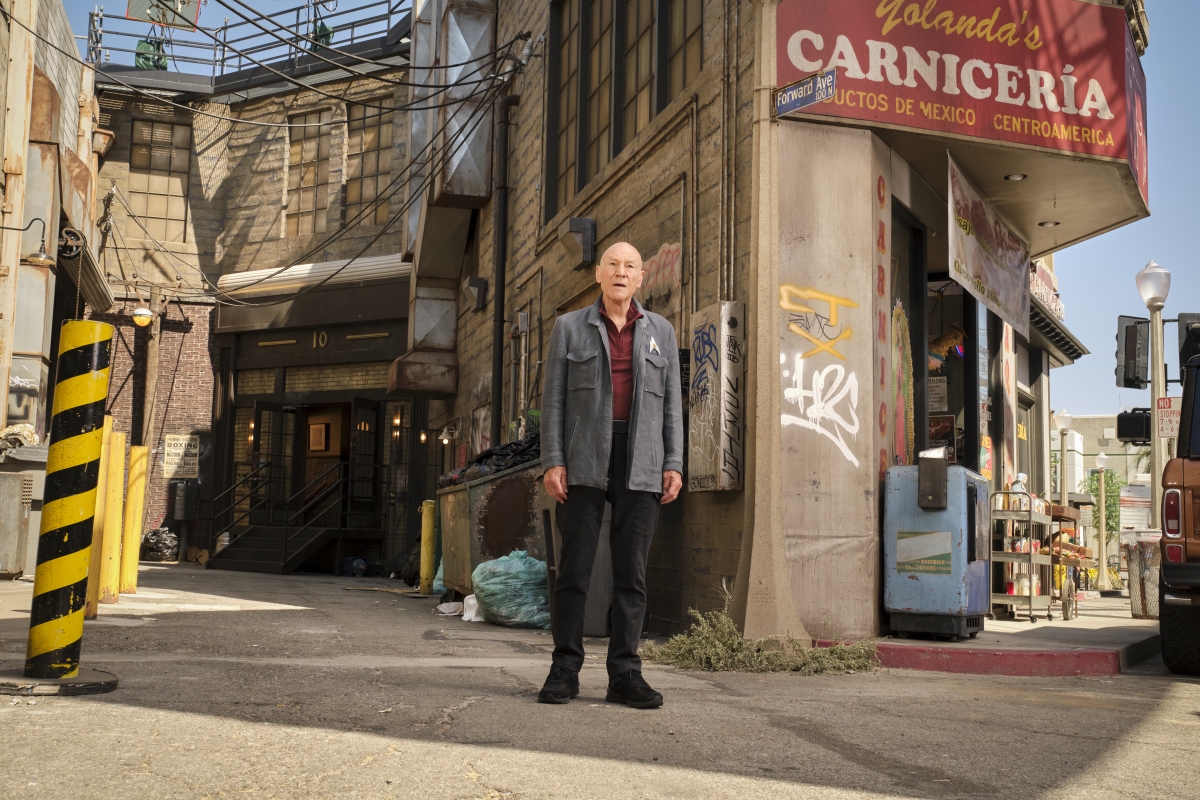 Raffi and Seven can’t get any info about Rios at the LAPD, but a helpful man in the lobby tells them that they actually want ICE and that they want to get there NOW.

Rios gets a swift education in 21st century immigration enforcement, mostly involving a taser. Teresa (Sol Rodriguez) is in the adjacent women’s’ cell.

Guinan and Picard sit at a table with drinks, but she’s still got her shotgun handy. He tries to convince her to help him, but she’s too disillusioned with Earth. A friend arrives to take Luna since Guinan apparently can’t take her along, and a heartbroken Guinan talks about all the ways we’ve screwed up the planet. Picard repeats her future words “The problem isn’t time, it’s you,” and she pukes from the time paradox. Even proof of disruption of the timeline, though, doesn’t seem to sway her.

Raffi and Seven jack a police car so they can 1) access the computer, and 2) get to Rios quickly. Raffi locates the facility where Rios is being held and Seven drives her first car. Agnes still doesn’t have the transporters up and they’re running out of time, but the Borg Queen (Annie Wersching) is smugly available to help…

Picard has caught Guinan up on the situation but won’t tell her his name in case it screws up the timeline (yeah, I don’t know either.) Guinan tells him she’s not the Watcher, and tells him she can’t bear to watch the racism and inequity any longer. He still tries to persuade her.

Teresa talks to Rios through the chain link about starting her clinic, but she gets released. Rios tells the cop who tased him the entire true story since he won’t believe him anyway. Seven continues to rack up driving infractions, while Rios gets loaded onto a bus headed south.

The Borg Queen alternately negs and praises Agnes. Agnes makes a deal – if the Queen fixes the transporter, Agnes will “trade sad sack stories” with her since they both hate being alone. More time to groom Agnes seems to be exactly what the Queen wanted.

Raffi discovers that Rios has been put on the bus, but the car is suddenly surrounded by other cop cars. Agnes tells them to stop, then beams them out in full view of a very confused cop. They materialize near where Rios’s bus will soon pass. Back on the ship, Agnes walks away from the Queen.

Guinan finishes loading her car and Picard is desperate enough to tell her his name. Which she recognizes (but not because she met him in Victorian San Francisco) and tells him she’ll take him to a Watcher, but warns him that “she’s a pill.” They go to a sunny park, where Guinan returns the combadge she stole from him and tells him it beeped a few times. Then a possessed white-eyed little girl walks up, tells Guinan to scram, and takes Picard on a walk. She makes him disable his combadge, then a series of more possessed white-eyed people guide him to the Watcher, who turns out to be…Laris (Orla Brady)??? The last person any of us was expecting? She vanishes him away into a doorway of smoke. 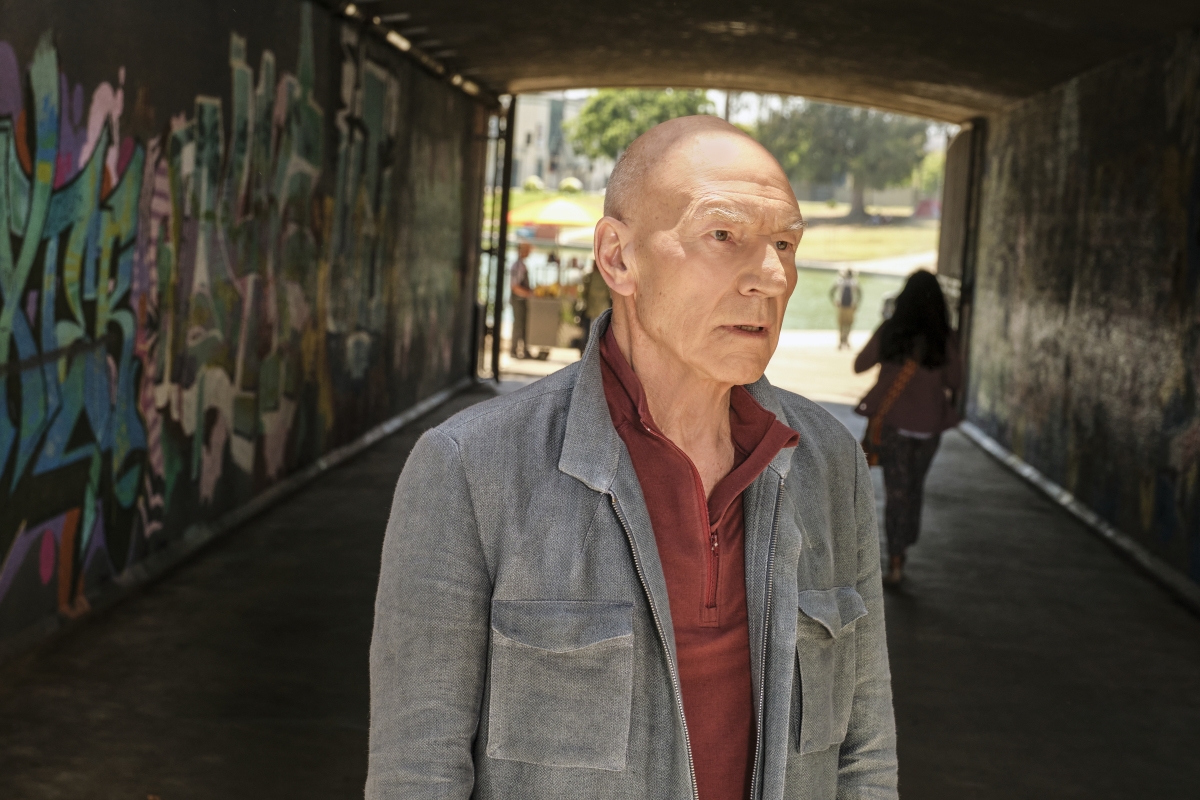 In a weird little coda, Q (John deLancie) tries to work some mischief on a random “The Europa Report” employee, but his snap is impotent.

How will Seven and Raffi spring Rios? Will Agnes and the Borg Queen become besties? Where are Picard and Laris now? Is “The Europa Report” a Star Trek clone à la Galaxy Quest? How will Q handle becoming powerless for a second time? Will it involve Guinan and a fork? I have so many questions but I am really enjoying the ride so far!