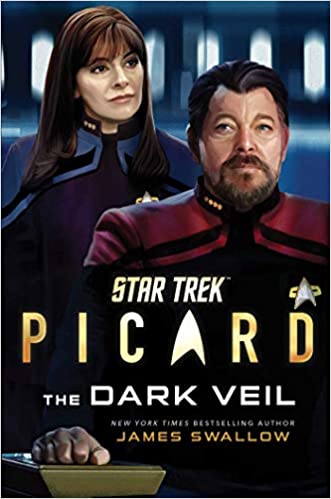 From the Publisher: The Alpha Quadrant is mired in crisis. Within the United Federation of Planets, a terrorist strike on the shipyards of Mars has led to the shutdown of all relief efforts for millions of Romulans facing certain doom from an impending super­nova. But when the USS Titan is drawn into a catastrophic incident on the Romulan-Federation border, Captain William Riker, his family, and his crew find themselves caught between the shocking secrets of an enigmatic alien species and the deadly agenda of a ruthless Tal Shiar operative.

Forced into a wary alliance with a Romulan starship commander, Riker and the Titan crew must uncover the truth to stop a dev­astating attack – but one wrong move could plunge the entire sector into open conflict!

Although technically a Star Trek: Picard tie-in novel, The Dark Veil is focused on the Troi-Riker family aboard the USS Titan, just a year after the attack on Mars and Starfleet’s withdrawal from the Romulan relocation mission, with their precocious five-year-old son in tow.  Admiral Picard Ret. makes only two appearances, via subspace, and the rest of the Next Gen crew are only mentioned in passing.  Read closely, and you’ll notice some nods to the previous Titan novels (like some background characters, or the ship’s shuttlecraft all named after jazz musicians), deep-cut references to TNG (like security officer Lt. Macha Hernandez – Tasha Yar’s original name), and maybe even a few nods to The Original Series.

In the seventh episode of Star Trek: Picard, “Nepenthe,” we are told what’s happened with the Troi-Rikers since we last saw them in Nemesis.  In The Dark Veil, Swallow gives us the opportunity to experience a pivotal moment in their professional, personal, and familial lives.  It is a joy to get to know Thaddeus Troi-Riker and see his curiosity and enthusiasm for language, as well as Riker and Troi balancing their duties with their family.  And from a larger perspective, the novel continues to provide context for the tenuous relationship between the Romulan Star Empire and the Federation shortly after the resettlement mission was scrapped, the consequences that both powers are now facing, and why the impending Hobus supernova seemingly caught everyone by surprise. 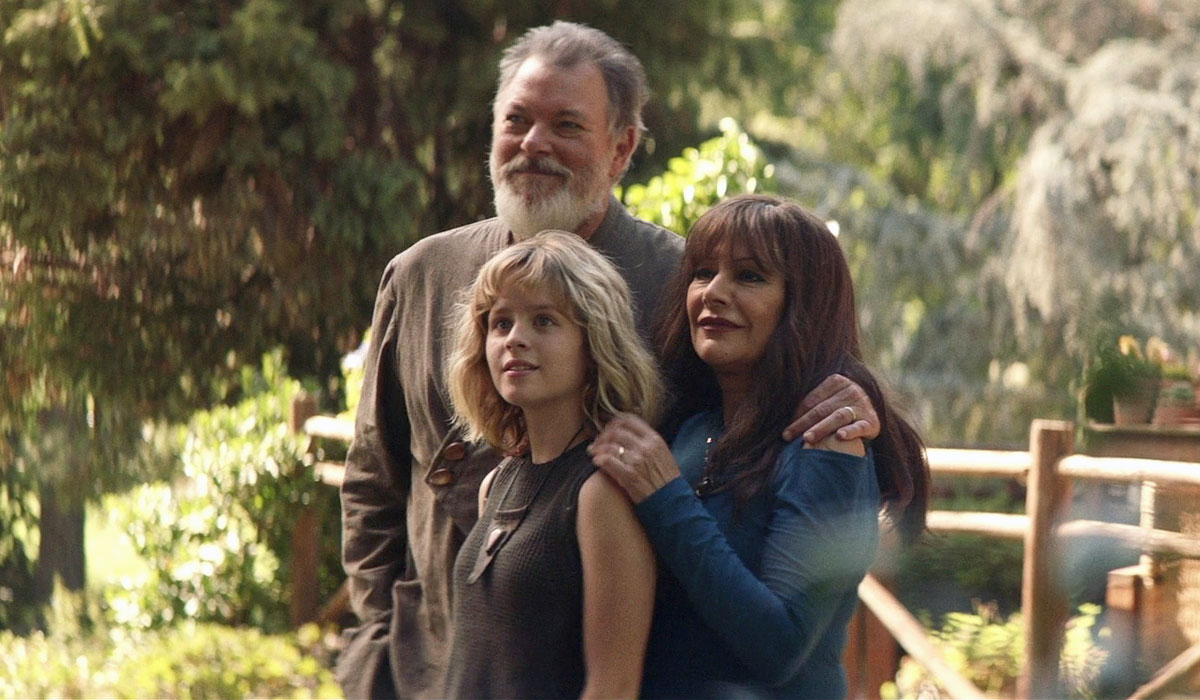 Echoed in this story are some of the major themes of the first season of Picard – most notably fear, which leads to prejudice, which leads to hatred.  This is especially relevant to our world today, and it’s far too easy to see ourselves and our leaders reflected in the Romulans and the Tal Shiar.  In counterpoint are the themes of compassion, home, and family playing out aboard the Titan, reflecting who we aspire to be.  We also see Troi and Riker acknowledge the shift that has taken place in the Federation, expressing both frustration and disappointment in its direction, and they do so rather candidly among their own crew and with a race of non-affiliated aliens called the Jazari.  While their former captain chose to resign, these officers – who we respect just as much – remain in Starfleet, upholding their ideals and convictions, with the unwavering belief that the United Federation of Planets can and will right itself.

My biggest gripe with this novel is just a two-letter word: “it.”  On page 56, we’re introduced to a “genderless alien” on the crew of a Romulan ship – an admittedly minor character, with fewer than 10 appearances – who is consistently referred to, in dialogue and prose, with the pronoun “it,” and no indication of that being self-selected.  While there are no “genderless aliens” in our reality, there are agender, non-binary, and trans people.  And while some individuals do choose to use the pronoun “it,” that usage is generally considered to be dehumanizing.  Furthering my discomfort with this usage, just over 100 pages later, another character of another race is referred to as “it” in dialogue to literally dehumanize him.  With Star Trek finally exploring some themes of gender on screen, it’s unfortunate to come across these “yikes” moments in the novels (and this isn’t the first time).  To be clear, I don’t think this kind of thing is intentional – I think it stems from authors wanting to be inclusive but not knowing the best way to navigate it.  I would love to see Pocket Books bring in a sensitivity reader.  Better yet, start contracting a larger and more inclusive pool of authors for the tie-in novels.  As far as I can tell, Una McCormack and Kirsten Beyer are the only non-cis-male authors who have had Trek tie-in fiction published since the mid-2000s. (A new TNG-era novel by Cassandra Rose Clarke is expected in April 2021 and a new DS9-era novel by Alex R. White is expected in July 2021, but there’s still lot of room for improvement.)

One additional content note, since it is a sensitive and potentially triggering topic, is that this novel does contain descriptive scenes of torture and severe injury.

All in all, I think this novel hits all the right notes – References to multiple series, Easter eggs, Romulan spies, mysteries, action, space battles; the belief that, despite our fumbles, we always strive to be better; a strong stance against discrimination and hatred; and high-concept science-fiction ideas.  And, of course, imzadi.  Of course, we have yet to see other Next Gen cast members appear in Picard, but when we do, I hope that we also get tie-in prequel novels telling more of their stories.

The Dark Veil will be published on January 5, 2021 in hardcover, ebook, and audiobook formats.  It will be available online or at your local retailer.

*This post contains affiliate links, so we may earn a small commission when you make a purchase through links on our site at no additional cost to you.