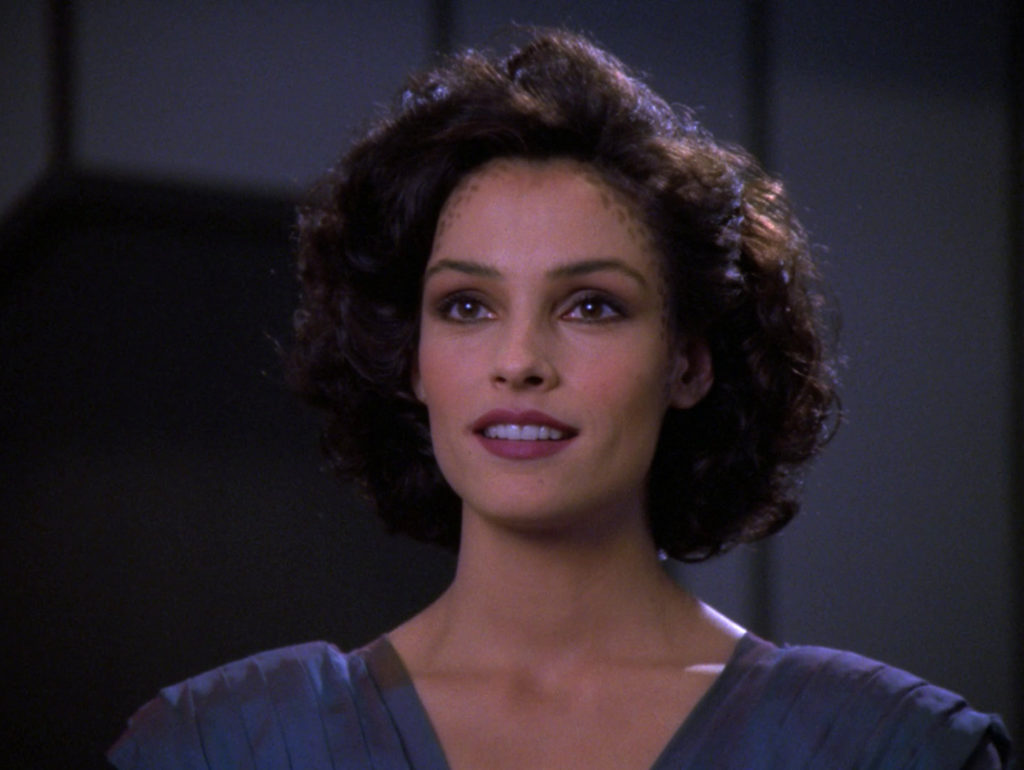 Actress Famke Janssen portraying the character Kamala. She has dark, curly hair that stays coifed around her head and above the shoulders (it’s the early 1990s, and you can tell, but it’s still tasteful). She’s wearing a grey dress, with pleated shoulders and a plunging V-neck. The only sign of her alienness are light brown spots that start on her forehead and trail to her ears, very reminiscent of the Trill redesign for Terry Farrell in Deep Space Nine.

“The Perfect Mate” (Star Trek: The Next Generation Season 5, Episode 21), is infamous for two things: Famke Janssen guest stars as a powerful psychic mutant almost a decade before doing it in that other franchise, but also, less positively, Picard and company help traffic her to an arranged marriage she can’t possibly consent to. Now, while the episode takes great pains to make clear that no money has changed hands, and that Kamala is not “property,” but “a gift,” this distinction is lost on several characters, as well as members of the audience. Somehow, in a show that posits a society that has “solved” gender-based violence, we’re being asked to believe that it’s defensible to groom a woman from early childhood to accept that the peace of two entire planets depends on her “choosing” to build her personality around one man. 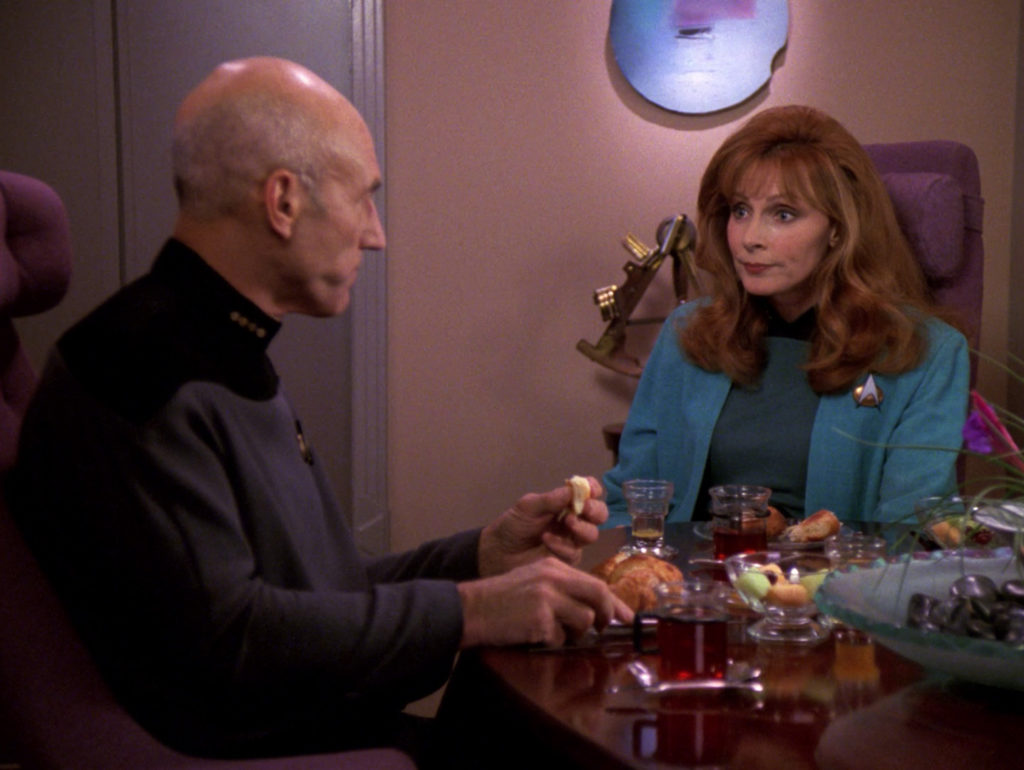 Over breakfast in his quarters, Beverly is taking none of Picard’s nonsense about Kamala’s mistreatment.

No matter the angle, the events of this episode spotlight a supermassive plot blackhole in Kamala’s storyline. Kamala is established to be an ’empathic metamorph, which means that her personality changes to match those around her. But this wasn’t enough for the writers, who also have her exude come-hither pheromones as part of her extended sexual maturity process, which culminates with her “imprinting”—building her entire personality around one man’s wants, needs, and desires. She will be his perfect mate, psychically able to predict his every whim. I would argue that this episode fails, in part, because so much of the plot is based on one of Trek’s worst impulses when it comes to the portrayal of women and feminine-coded folks: the male gaze. Kamala is a literalization of the male gaze.

As initially conceived by Laura Mulvey, the concept of the “male gaze” is a critique of a manner of filming where feminine-coded performers are seen primarily as sex objects. This is at times done quite literally in the way actresses are framed by the camera, but it has a further pervasive impact on the representation of women and feminine folks in mainstream media. When generalized, the theory usually calls into question why women (mostly white and cis-gendered) are depicted so very often as half-characters, there only to whet the sexual or romantic interest of the presumed audience. This audience is presumed to be straight, white, and cis-gendered men or boys of a certain age. To put it in the context of the episode, however, we ask: Why was this incredibly powerful empath groomed from the age of four to accept an arranged marriage, instead of simply negotiating a peace deal herself? Could it be because the writers wanted to put Captain Picard in a romantic pickle, and forgot that the object of his romantic interest might need to make some sort of internal logical sense? 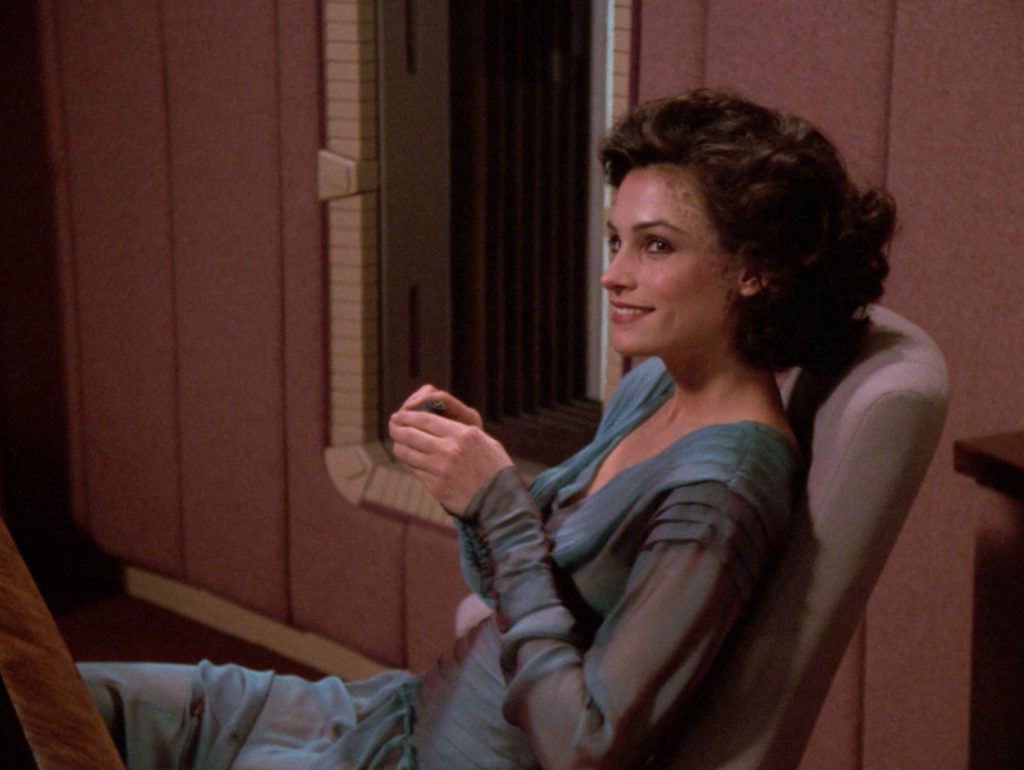 Kamala smiles coquettishly at Picard from his chair in his ready room. As she leans back in profile, her sheer chiffon gown and forehead spots are displayed prominently.

Kamala, as written, typifies several aspects of Star Trek’s distinctive brand of male gaze. She was given hot girl spots, which Memory Alpha notes were the inspiration for Jadzia Dax’s Trill redesign. She’s travelling in a ballgown and her only change of outfit is a wedding dress, reminiscent of Deanna Troi’s struggles to get into uniform, and several “plot” reasons (like male metamorphs being more common) are floated in an attempt to ground this incoherent nonsense into a parody of equity. Canny viewers might connect this with Enterprise’s decision to retcon Orion sex-slaves as secret matriarchal overlords.

Even redditor orionthrowaway1, a “pretty apolitical guy” has some questions about this retcon. Never to fear though, the most upvoted comment told them that they just didn’t understand the episode. Orion women aren’t slaves, they’re spies!

Now, personally, I am not opposed to a romantic premise that strains a bit of credulity, but after a certain point writers have to own the character they’ve created. If you’re going to invent an alien who’s biologically programmed to have almost zero consent or control over her innermost being, then go to the lengths of depicting her as so alluring to men that she cannot freely walk the ship (comphet is real), please don’t pretend that it’s justified because humans have a long history of arranged marriages and, something, something, something Prime Directive. While any self-respecting romance novel enthusiast like myself is able to weather a bit of plot contrivance for the sake of compelling storytelling, that’s not what’s happening here. 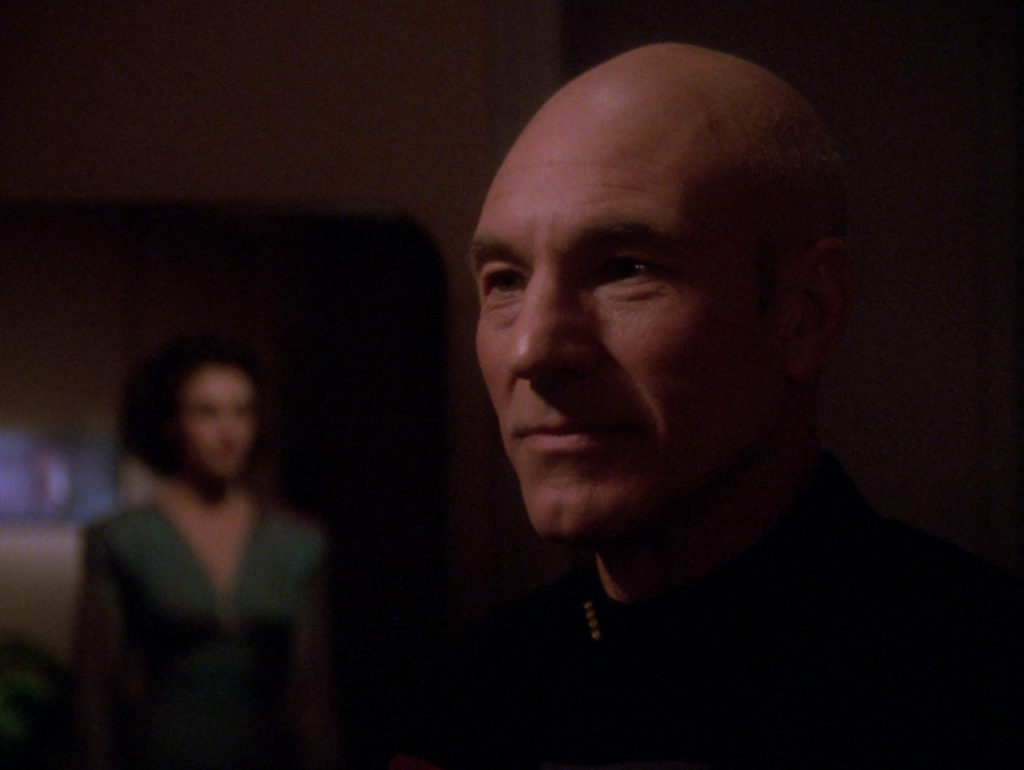 In Picard’s first personal visit to Kamala, we first see her not as herself, but through a mirror. We don’t notice at first, because she’s life sized and not distorted at all, but then he moves, and she goes out of focus. The camera direction is clearly engaging with Kamala’s theme of self discovery, but is still centering Picard for some reason.

The screenwriters have set up Kamala’s arc to be one of self discovery—Picard talks her through how she might come to understand herself, away from the influence of other people (ie men), and she is given time to reflect and speak on that newfound knowledge. However, they’ve also written her into a narrative box such that, by her very nature, her first act of self-determination is to pattern her entire personality on someone else. Jean -Luc Picard to be precise. Rather than give her a new, less traditional, more active role in her society or even envisioning her as rejecting of the biological determinism she was bred to believe in, the writers decided that she is satisfied with a life attached to a man she will never love, and who is more interested in trade agreements than her.

As if to further the offense, according to the film language at the end of the episode, viewers are supposed to feel the most sympathy for Picard, as Kamala disappears after her wedding kiss. Instead of showing Kamala’s complicated feelings, even if subtextual, we zoom in on Picard and his emotions, not once, but twice. It happens during the wedding and after Picard says something dismissive to the creepy sex-trafficker/ambassador from Kamala’s home planet at the end of the episode. One could argue that this implies that Kamala is resolute in her decision making process, which might be empowering, if it weren’t so boneheadedly illogical. This woman just made the first real decision of her life, fallen madly in love, and then married a man who she’s supposed to fool into believing that she’s imprinted on for the rest of her life. In contrast, Picard merely lost access to a woman who  he had never expressed overt interest in, saying earlier, “Kamala, have I not done everything to discourage this?” 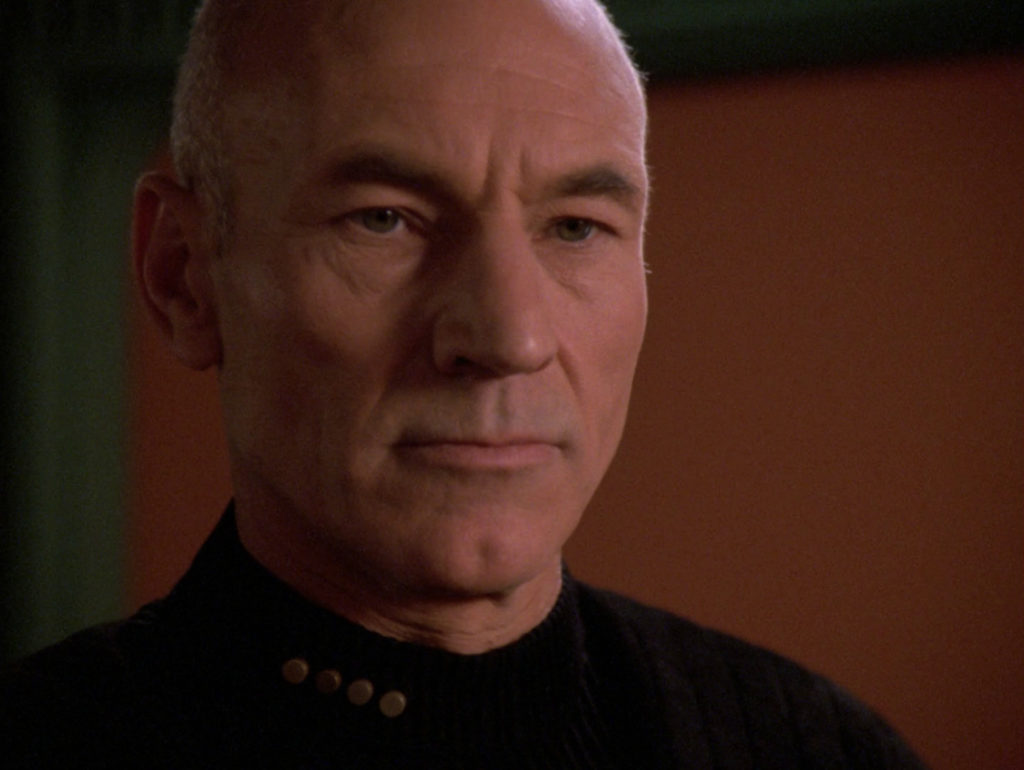 The final shot of Picard as he contemplates the ambassador’s comment. How did he resist his own “Perfect Mate”? The fact that she is a victim of grooming that isn’t able to provide consent on a biological level isn’t one of the ambassador’s turn offs, apparently.

Really, this isn’t a big of a surprise to Trekkies, who’ll soon be asked to believe that Seven of Nine’s catsuit is really about skin regeneration, not marketing Jeri Ryan’s body; but there’s something particularly blatant about writing a female character that’s biologically programmed to have no personality outside of the one men give her. In fairness, the male gaze impacts everyone who consumes mainstream media and, equally, every writer on this episode, save one, went on to write varying degrees of more actualized Star Trek women. René Echevarría, for example, wrote “Equilibrium,” “Facets,” and “Rejoined”—all Dax-centric episodes, one of which portrays the most overt depiction of lesbianism until Jett Reno. There is a clear attempt to see women through something more than the male gaze in Trek, but even so it lingers. Hopefully, by deconstructing things like “The Perfect Mate,” we can actually start to move beyond it.