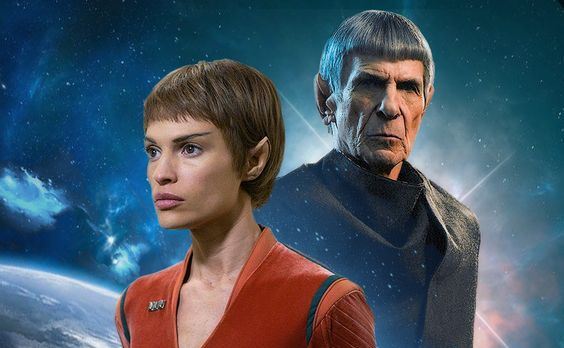 T’Pol has always been a character who is criticized harshly; in fact, I often wonder if she would have received such backlash if she had been on a more beloved series, like The Next Generation or even Voyager. Deanna Troi and Seven of Nine received their own criticism though, for one of the same reasons that T’Pol receives hers: appearance. T’Pol cannot be analyzed as a character without acknowledging her sexualized surface politics and the corresponding social and behavioral expectations attached to her.

What I want to focus on particularly in this piece is the way in which her sexualized appearance complicates her already complex, Othered identity as a Vulcan. Indeed, when compared with Spock, a half-Vulcan who is always discussed as battling his identity, I would argue that in some ways T’Pol, a full Vulcan, fights even harder battles, due to her surface politics. Judith Butler has described surface politics as the way physical appearance dictates expectations for behavior¹. Let’s see what this looks like for T’Pol:

When we are first introduced to T’Pol, she is with the High Command and is wearing the corresponding traditional attire: long robes with elaborate sleeves and collar, made with heavy material of neutral color. Her clothing reflects her identity as a Vulcan with the High Command, a lauded position she worked long and hard to attain. It is only when she begins her commission on the Enterprise that she is dressed in the skin-tight uniform. Her hypersexualized appearance is therefore directly connected to her placement on the Enterprise.

T’Pol is essentially stripped of her identity as a Vulcan and presented in attire that offers peak opportunity for the male gaze, which  Laura Mulvey describes as any time that a female character is put on display for (straight male) viewers to observe as an object rather than a person².

T’Pol is already the Other onboard, even more than Phlox, because she belongs to a race despised and distrusted by humans, even by the captain of the very ship she’s serving on as second–in-command. Her Vulcan identity is as much on full display as her body.

While the crew and Archer do eventually welcome her into the family, she is still Othered simply by the constant difference in her physical appearance. 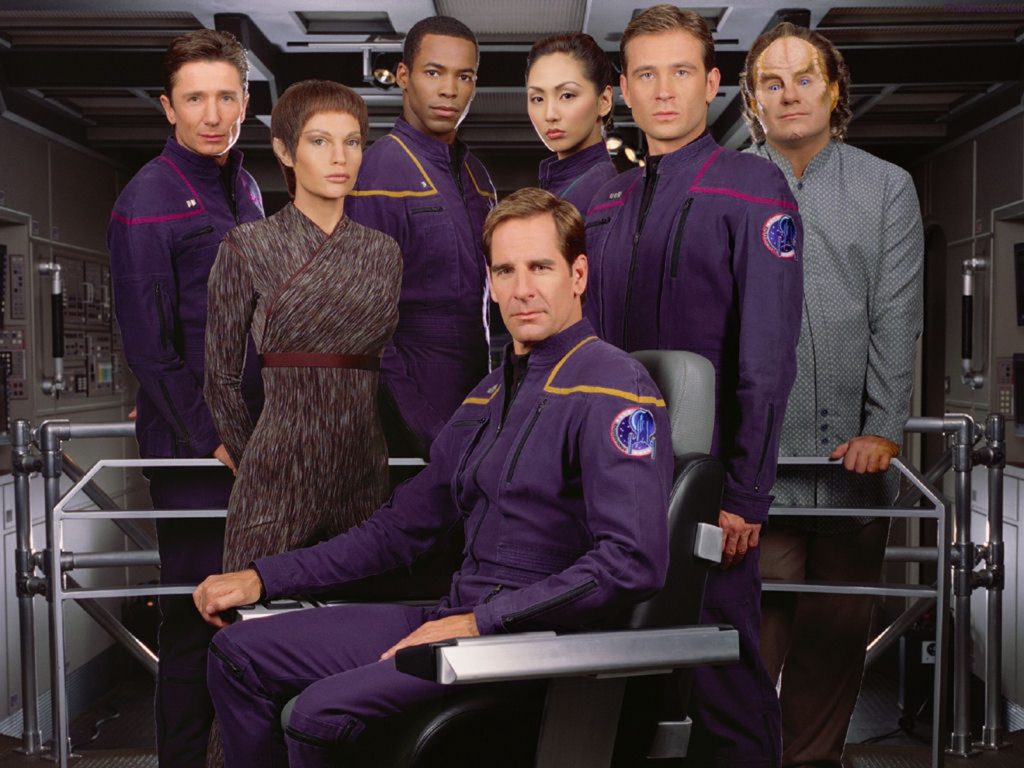 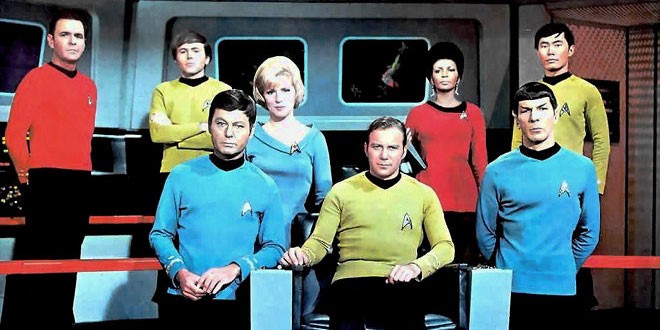 Spock wore the same Starfleet attire as the rest of the TOS crew. The easy explanation is that he was a member of Starfleet, whereas T’Pol is not. Still, the difference is significant. Spock successfully blends in with the crew more easily, on appearance alone, not to mention his half-human identity. While he may not appreciate his human characteristics, he acknowledges them in himself and in his crewmates. Yes, McCoy banters with him over his identity as a “green-blooded Vulcan,” but there is no real animosity behind the words.

Furthermore, he has the fullest, most personal support from the most important and powerful figure on the ship: the Captain himself. T’Pol is afforded none of these luxuries, and has to adjust to human culture nearly overnight—an impossible task for which she is never acknowledged until much later. While Archer loosens up on her, the bigotry and animosity he and the crew show her during the first few episodes could not be more different than the way Kirk constantly supports Spock, defending him when tensions rise, and including him in everything. T’Pol fights an uphill battle before she even steps on the ship.

Vulcans deal in logic and straightforward communication, but on a ship full of humans, T’Pol is inundated by new forms of expression. Imbued in this form is the notion of linguistic politeness, including positive and negative face, a concept elaborated by Penelope Brown and Stephen Levinson³. Positive face basically expresses need for validation, for positive comments, whereas negative face includes the need to profusely apologize for social inconvenience. Neither are aspects of Vulcan linguistics.

T’Pol doesn’t easily acclimate to the way everyone else on the ship speaks. Even Phlox has a sense of sarcasm and humor that allows him to easily assimilate into the crew’s society. Since communication is so central to social engagement, it is an extension of surface politics in that the way we present ourselves when speaking and listening is part of our physical presentation. T’Pol cannot play the part of the social behavior expected of her, because she cannot mirror the appearance of appropriate human conversation.

For example, T’Pol doesn’t recognize negative face linguistics that Hoshi expresses in “Vox Sola” when she says, “What I’m trying to say is that I could use help from someone with a background in higher mathematics.” T’Pol does not recognize that Hoshi doesn’t want to admit that she needs help until Hoshi is forced to ask for assistance outright. Later, as they work, T’Pol fails to properly deal with Hoshi’s positive face speech:

HOSHI: This goes beyond duty, Sub-Commander. You’ve been looking over my shoulder ever since you came on board. Double-checking my log entries, my translations.
T’POL: It’s my job.
HOSHI: Is that all we’re talking about? You don’t think I belong on Enterprise, do you.
T’POL: On the contrary. It would be a great loss to Starfleet if you were not a part of this crew. If you feel I’ve been unfair to you, I apologize, but I hold you to a high standard, Ensign, because I know you’re capable of achieving it. Shall we continue? (“Vox Sola”).

Hoshi has to force T’Pol’s hand into reassuring her, and even then, T’Pol returns them to the task at hand almost immediately. This aspect of trivial conversation and subsurface language is not part of T’Pol’s identity, yet she is expected to perform it with no time to adjust. 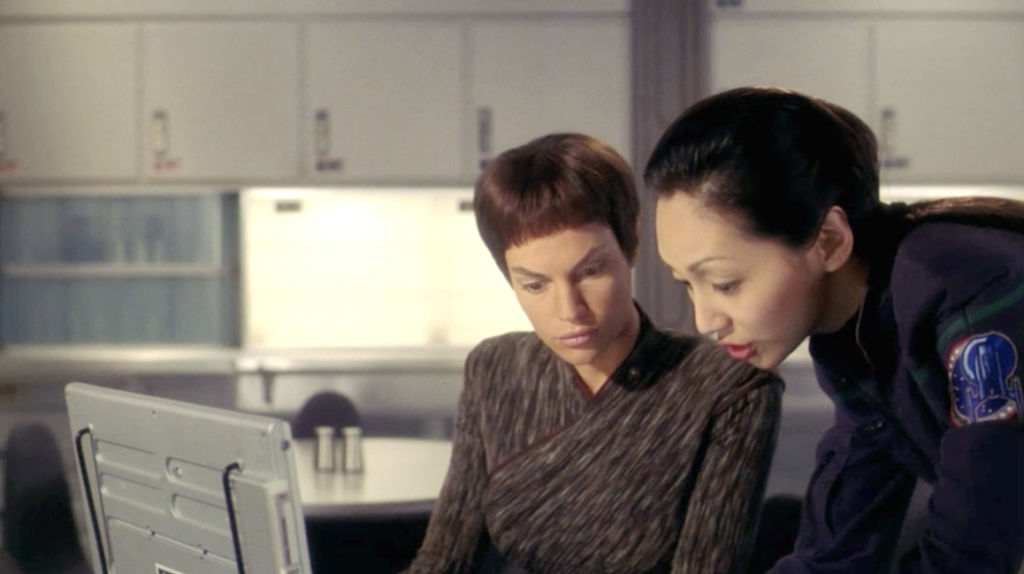 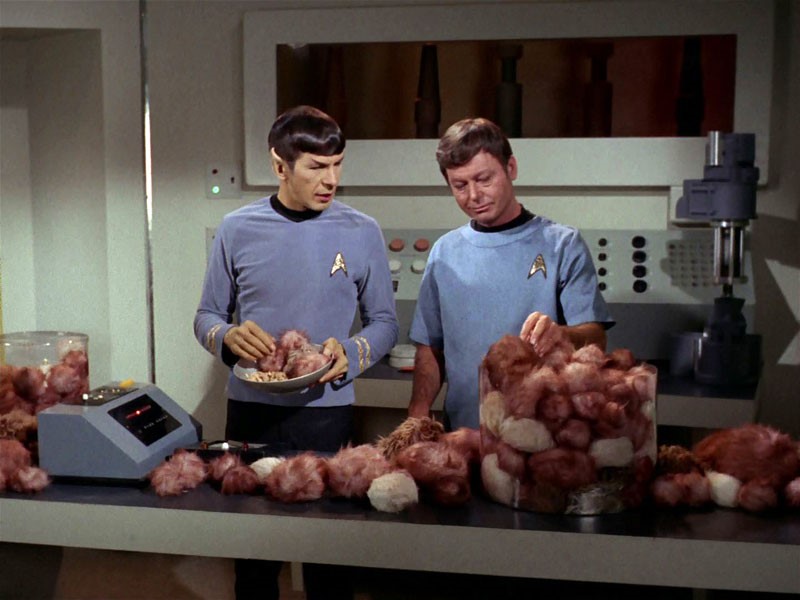 Spock has obvious difficulties with this too; however, there is an underlying fondness and even sly manipulation on Spock’s part in all his exchanges with McCoy. For the most part, Spock understands “the human need for” you-fill-in-the-blank, even if he doesn’t live by it and claims that it’s illogical. He can hold conversation while he works. He can perform the social responsibility expected of him on a ship full of sympathetic humans, though there are obvious examples in the episodes where this becomes problematic for him and he has to make professional calls with which no one else agrees.

But as T’Pol works alongside this human crew and begins to grow more and more illogically fond of them, she fights an even harder battle deciding how much of their mannerisms to let in and influence her identity. She, unlike Spock, cannot be a child of both worlds, yet she has to live and perform as though she is.

T’Pol brings her heritage aboard with her: she refuses to eat meat, she refuses to eat with her hands, she meditates in her quarters, she administers neuro-pressure sessions, and she instructs in self-defense techniques,. She experiences Pon Farr, she receives communication from Vulcan about her arranged marriage, and she references the Vulcan Science Ministry database frequently.

Jolene Blalock herself observed that her uniform could be seen to reflect Vulcan logic and basic functionality, stating that it had “a holster for my gun, but that’s about it… I guess T’Pol is just so low-maintenance that she doesn’t need anything else. She’s very feline in her movements, so really, the cat suit works.” Even her attire in her quarters, which, on the surface level, is an attempt to sexualize her appearance, is actually quite logical when considered through the lens of her culture, with Vulcans used to the hot climate of their planet. While someone else might enter her quarters, see her in loose pyjamas, and make a cultural assumption based on the majorly human culture on the ship, to T’Pol, her attire is logical and nothing more. It is the humans, unsurprisingly, who confirm the stereotypes of physical appearance. And it is among these humans which she chooses to remain. In the process, her Vulcan identity is seriously compromised. Everything she once clung to as part of her identity has been altered through the pressure to conform to a new one. 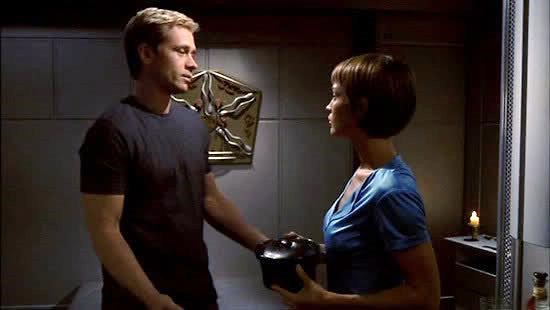 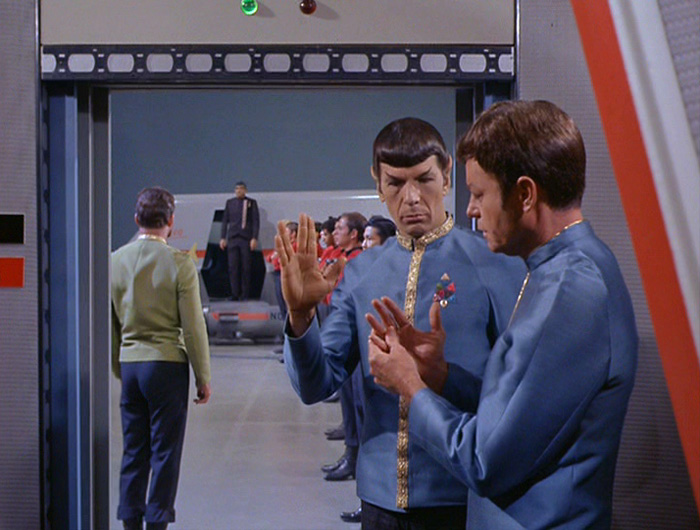 By contrast, Spock is Othered, which Wei Ming Dariotis explains as the clear Vulcan representation as alien within Star Trek⁴, but not nearly to the extent that T’Pol is.

T’Pol could not be in a more different situation. She has no obligation to explore humanity because there is no part of her that is human, and Earth and Vulcan are much less integrated and cooperative with each other; yet she chooses to live with humans and thus subverts her own culture and race’s expectations, as evident by Ambassador Soval’s clear disapproval of her choices. Because she is a full Vulcan adapting to human customs, she forges an entirely new hybrid identity of Vulcan and Human.

Theoretically, it is thanks to T’Pol’s attempts to bridge the dichotomy and subvert human stereotypes that Spock even has an environment in which to practice and flesh out his own individual identity. Despite her Othering, T’Pol paves the way with her efforts toward a more unified and accepting society. She is criticized in every way by theorists and fans alike, but she represents far more than the superficial complaints she receives.

Perhaps Star Trek fans who laud the franchise’s message of acceptance and nondiscrimination against physical appearance should practice a little more of what they preach. Take time to read past any superficial goals the directors may have had in mind and approach it from a cultural perspective instead. T’Pol’s battle against her surface politics directly correlates to the battle with her Vulcan identity amid human conformities. For every characteristic she displays, there is a human stereotype she must fight. But if there’s one thing Star Trek characters do best, it’s fighting when it’s hardest.