I’ve always had social anxiety, but when I was eleven years old Star Trek: The Next Generation (TNG) premiered and I felt like I had finally found an outlet for my fears. Whenever I watched TNG I felt like I was in a safe space free of judgement. Lonely and depressive, I obsessed over the characters, whom I viewed as my second family. My real family was distant and reserved. My parents never fought, but they never showed much affection either. I wasn’t told there was something wrong with showing emotion, but through their behavior, my parents modeled stoicism and emotional unavailability. I learned that the best way to interact with others was by hiding how I really felt.

Due to my fear of judgement, I longed to be able to read other people’s minds. For this reason, my favorite character was the empathic Deanna Troi. But since I didn’t have Betazoid abilities I needed a different strategy for dealing with social interactions. Enter the Vulcans. There were only a few episodes about Vulcans in TNG but by this point, I’d started watching reruns of the original Star Trek (TOS). I wasn’t a huge fan of TOS but I loved Spock. He and other Vulcan characters, such as Selar from TNG or Saavik from the movies, became my role models. Since I’d already subconsciously decided that emotions were the enemy, a race that practiced emotional suppression was worth emulating. 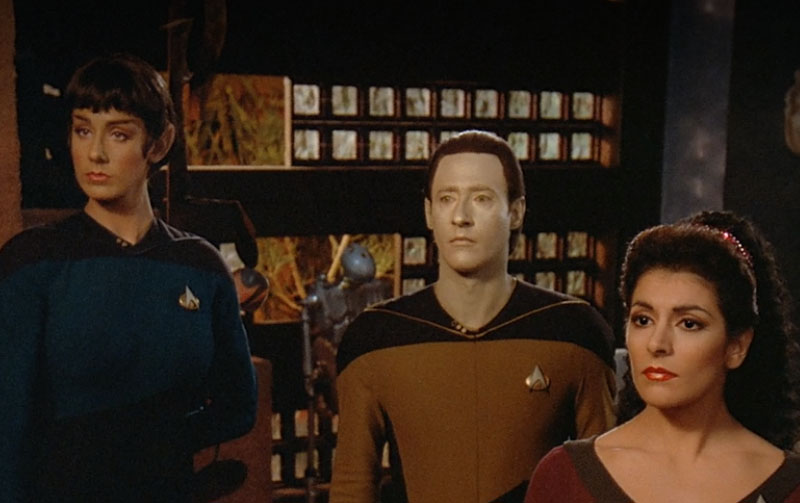 All my TNG faves

As a teenager, I became so dedicated to Vulcan philosophy that anytime I encountered a difficult situation I would repeat a mantra to myself: “I am Vulcan, I am Vulcan, I am Vulcan.” Having this mantra was often genuinely helpful during times of physical stress, but it proved useless in dealing with anxiety. No matter how much I repeated these words I still couldn’t navigate the turbulent waters of my own self-doubt. In fact, idolizing the Vulcans only made things worse. Anytime I felt like I had botched a social interaction and assumed others hated me, I doubled down on my Vulcan beliefs and convinced myself that I was a failure because I was still too emotional. Rather than embrace how I felt, and explore my feelings, I further suppressed my anger and sadness, believing this is what a Vulcan would do. I became cold and judgemental towards others and self-righteous about this standoffishness. In retrospect I can think of many times I alienated other people by dismissing their feelings. All I really wanted was friends, but my adherence to Vulcan philosophy was making me inaccessible, which exacerbated my loneliness, as well as my self-hatred.

As I matured, I came to understand that emotions are normal and expressing them is healthy. It’s also healthy to care about what other people think. To truly not value other people’s opinions is sociopathic. I still have social anxiety but now, as an adult, I can forgive myself for my “failures.” I’ve let go of my mantra and have finally allowed myself to be completely honest with myself, my close friends, and my significant other.

Recently, in addition to watching Star Trek: Discovery, I rewatched all of TNG, Deep Space Nine, Voyager and Enterprise. It was during the TNG episode “Sarek” that I finally had an epiphany: the Vulcans are villains. Each series has at least one episode that showcases the Vulcans in a negative light. What I had viewed as strength as a teenager was actually weakness, perhaps even malevolence. There are countless examples of Vulcans behaving badly, with many performing non-consensual mind melds, including Spock, who forcibly melds with Valeris in Star Trek VI: The Undiscovered Country in order to extract information from her. 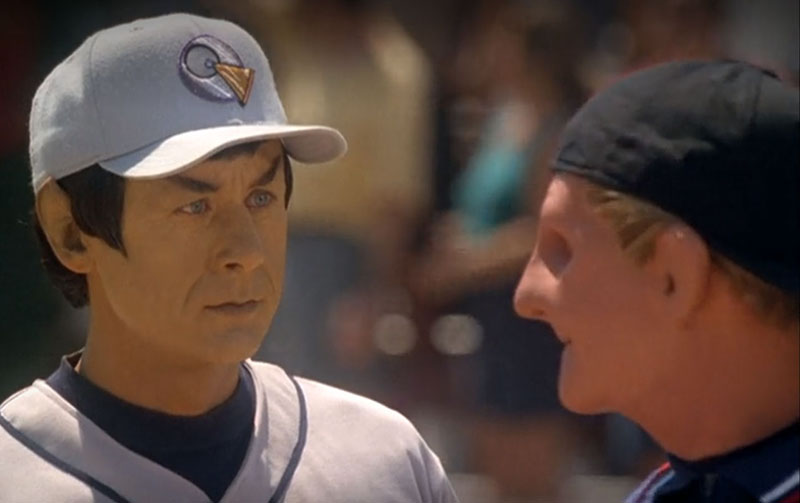 Only the pettiest Vulcans play baseball

Even as a kid I couldn’t help but notice some of the more egregious Vulcan behavior, such as that of Captain Solok in DS9’s “Take Me Out to the Holosuite.” Solok is correct in his assertion that Vulcans are stronger and faster than humans, but he’s so arrogant and petty about it that I can’t blame Sisko for resenting him. But when I was younger, I believed that such Vulcans represented anomalous individuals. I now realize their entire culture is toxic.

In VOY, Tuvok is initially so dismissive of Neelix’s overtures of friendship that his behavior borders on cruelty, and he is so cavalier about mind melds that it’s a wonder anyone on Voyager escaped unmelded. Vorik is even more problematic. He sexually assaults B’Elanna Torres in “Blood Fever” because he is experiencing his first pon farr. Certainly, he’s not in his right mind during this exchange, but the fact that he is never disciplined for this attack sets a dangerous precedent, implying that his violence is justified because it is part of his culture. 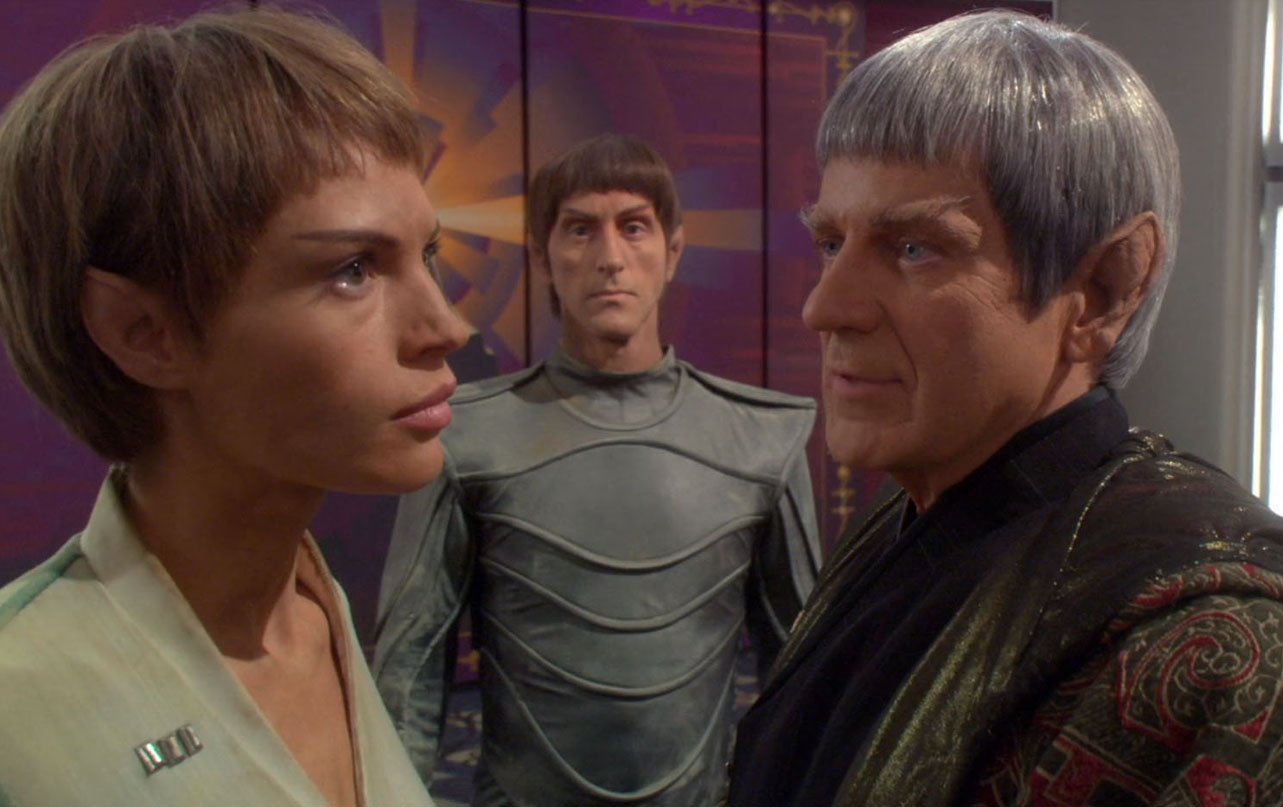 V’Las shows T’Pol how to be a jerk

ENT is the series that is most clear about the Vulcans’ toxic society, showcasing many episodes where the Vulcans treat others with disdain. They illegally spy on the Andorians in “The Andorian Incident” and try to hold back human development under the guise of protecting us from our own immaturity. They are even discriminatory towards other Vulcans when they don’t perfectly adhere to mainstream principles. In “The Forge” they frame the Syrrannites for a bombing, and in “Stigma” they severely stigmatize those suffering from Pa’nar Syndrome. In “Kir’Shara” the Vulcan High Command is revealed to be corrupt, which leads to the Vulcan Reformation, but Vulcan culture remains harmful. 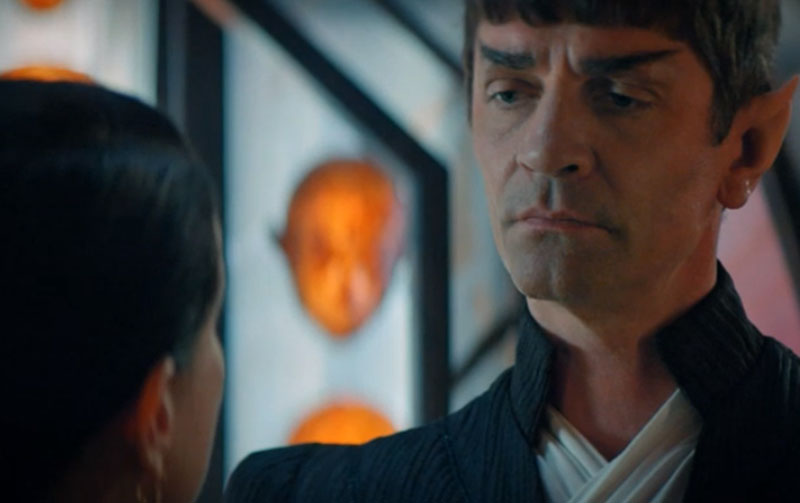 Sarek being the worst.

This is perfectly illustrated through Sarek in his appearances in TOS, TNG, and DSC. He is a terrible father to both Michael Burnham and Spock, rejecting his son simply because Spock chooses to forge his own path and not attend the Vulcan Science Academy. As is shown in “Lethe,” he then lies to Michael about her own abilities, telling her she didn’t gain entry into the Academy. In “Light and Shadows,” he’s also revealed to be a pitiful husband to Amanda Grayson, ignoring her efforts to reach their son when he is struggling with a learning disability, and influencing her to act coldly toward the boy so as not to contradict his parenting style.

And yet, in spite of all this unkindness, Sarek is actually more tolerant of humans than other Vulcans. His peers are disdainful of his human brood, with logic extremists issuing threats towards his children. I used to think it unbelievable that such logical people would go to such shocking lengths, but upon reflection, it makes perfect sense. Vulcans are a people utterly convinced of their own rightness, and great conviction leads to extreme behavior.

Vulcans supposedly adhere to the philosophy of Infinite Diversity in Infinite Combinations, which celebrates variability. Yet, few Vulcans seem to practice this belief in their attitudes towards others. The ones who do, like T’Pol, Spock, and Tuvok, get there through their interactions with humans, and they are the exception rather than the rule. Generally speaking, Vulcans are so convinced of their own superiority that they end up being hateful, prideful, and malicious. They may be founding members of the Federation, but Vulcans are secretly villains, as sneaky and duplicitous as Romulans, but all the more insidious because of their status as allies. I can only breathe a sigh of relief that I finally realized this and no longer strive to be like them.

13 comments for “Are Vulcans Villains? Vulcan Philosophy and my Mental Health”